Mobile App Development Process – How Does an Idea Become an App? 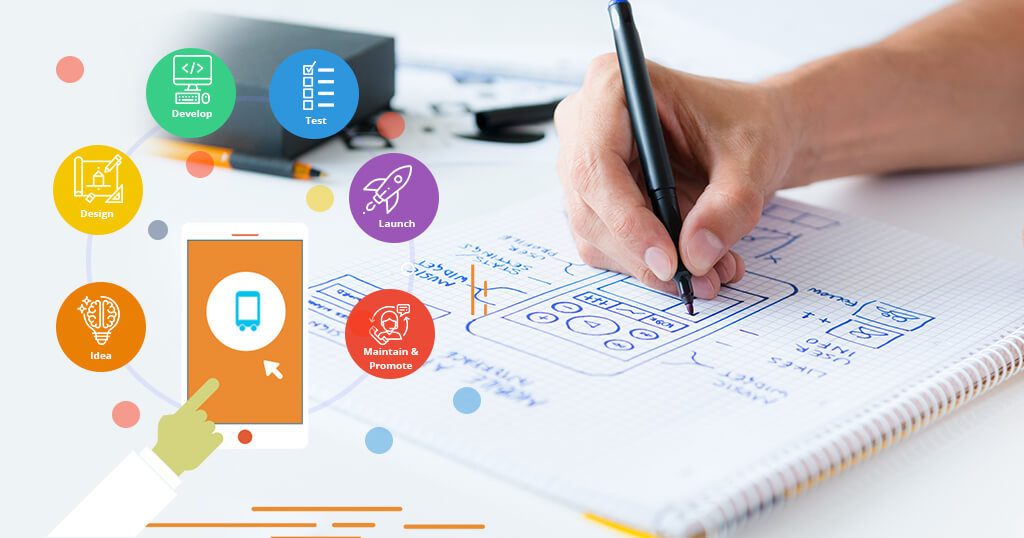 Smartphones have revolutionized the way we do business at a faster rate than we anticipated. Be it booking a travel ticket or arranging accommodation, ordering food or buying groceries and paying bills, mobile applications help us do the task conveniently and efficiently. Subsequently, the popularity of mobile apps is increasing at a swift pace.

With the number of smartphone users expected to reach 2.5 billion by 2019, the usage of mobile apps is sure to skyrocket in the coming years too. As per a market research study, the app economy will be worth 6.3 trillion by 2021.

On the other hand, having a mobile app has become more or less a necessity for businesses these days. It facilitates brand building, increases awareness, improves customer engagement, promotes revenue growth, just to name a few of its benefits.

To put in a nutshell, having an app opens up new opportunities for business growth. However, most of us lack awareness above the efforts that are needed to convert an app concept into pixels on a screen.

The mobile app development process is not a walk in the park. It requires a thoughtful and step-by-step approach in order to reap the desired benefits.

If you are contemplating building a mobile app, here is a comprehensive guide on the topic. To make it easier for you to understand, we have broken down the entire app development process into six key steps backed by rich visuals and an app development infographic.

Be it any mobile app development project, dividing the work into steps makes the process less complicated and easier to execute. Moreover, the work can be planned in specific time frames and thereby avoid unnecessary delays in the completion of the project.

The key phases that are involved in any mobile app development project are listed below. 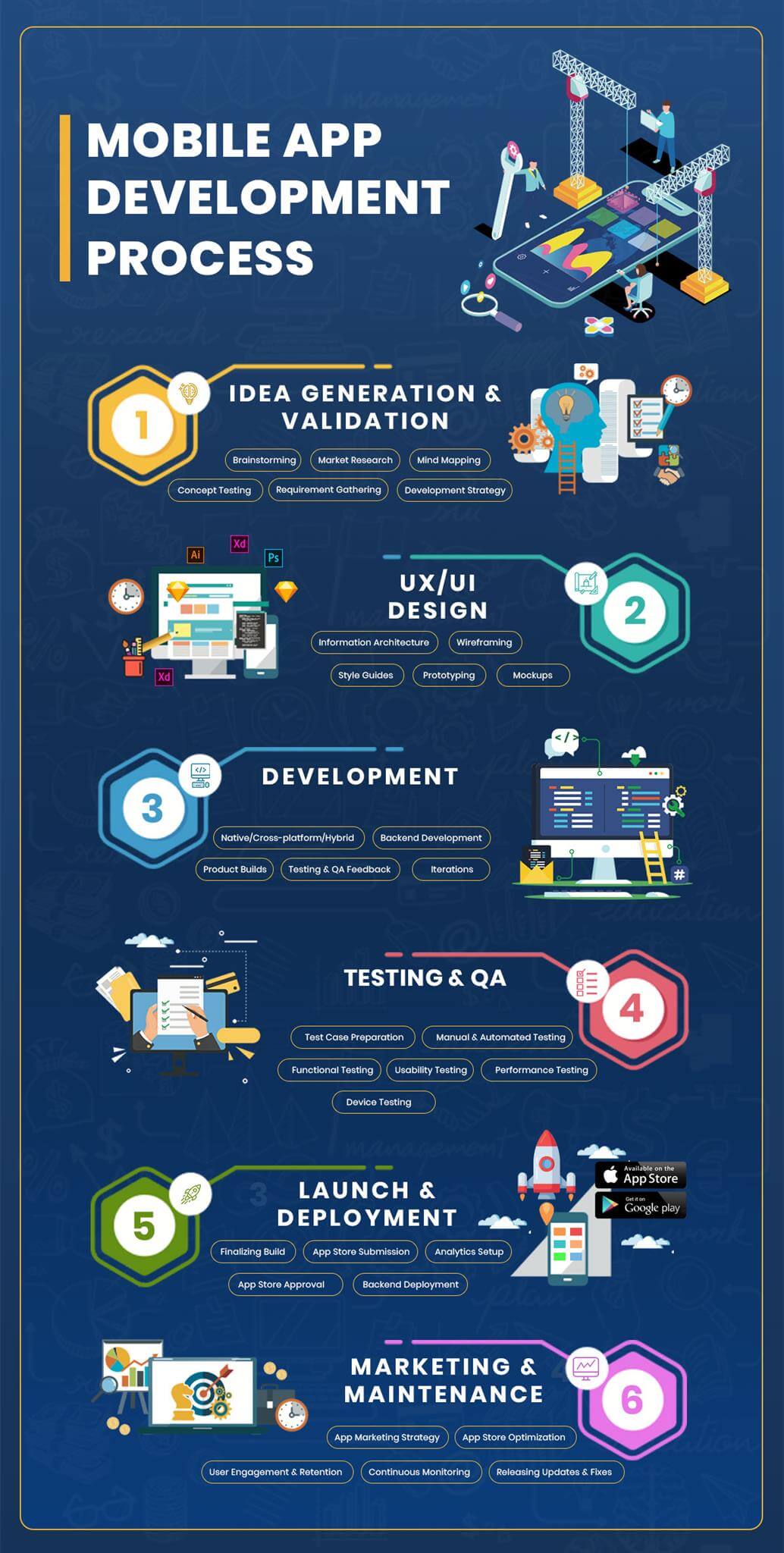 Here’s a detailed explanation of all the six key steps in a mobile app development process.

Once an app idea/concept is generated, it is important to put in the efforts to do a proper market study and find out the viability of the project. Sometimes, market research will result in the discovery of new ideas. The research stage is not only meant to discover new ideas but also to come up with the list of requirements needed to fix the scope of your app project.

Having clear answers to the following questions upfront will go a long way in ensuring the success of your app development project.

The user interface (UI) and experience design (UX) are two crucial factors that determine the success of any mobile application. While UI design provides the visual medium that manifests the app to the user, UX design speaks about multiple aspects of human interaction with the app. Not to mention, the design should be interactive and engaging.

The design stage includes multiple aspects which are discussed below.

This stage covers the actual realization and coding of your app. The development stage includes multiple activities such as establishing the development environment (that includes ways to do simple testing), developing various parts of the code, preliminary testing and creating the app that can be installed and tested.

Almost any web programming language and database for the back-end can be used for app development as long as the server technology supports it. For native mobile apps, you can choose a technology stack required by the targeted mobile platform – Android or iOS. Objective-C or Swift programming languages are used for developing iOS apps, while Java and Kotlin are popular for Android app development.

There are quite a few programming languages that are used for developing mobile apps – the key is to pick one that is suited for everything that your app needs to achieve. This depends on the mobile app technology that is chosen and the associated backend technology along with the choices made in the previous stages. The best-suited ones can be arrived at with a step elimination by choice.

Mobile technology evolves fast with new versions of mobile OS platforms being launched every year. Mobile devices are getting better and agility is essential. For mobile apps, this transforms to adhering to timelines and budgets and managing the time-to-market.

Adoption of agile development requires planning the complete development stage in terms of cycles. Then Mobile app development process starts with pre-stage, continues with multiple iterations and ends at the post stage. Every iteration cycle is a potential app that can be launched.

As the development team completes each milestone, it could pass on the app to testing team for quality check and fixing bugs.

Testing is another important stage in the mobile app development lifecycle. Testing lets you know the quality of the app and gives an idea about how good or bad the app is. The testing phase may overlap with the development stage in many ways and this depends on the way the development is planned and executed. For example, in case of agile methodology, every sprint or iteration could have a testing phase.

Testing is done to understand the defects in the app and to resolve them. If unresolved, it may cause the app to malfunction or create other technical issues. It is done by a separate team (other than the development team), has criteria, documentation to plan and execute the process. The testing phases are often accompanied by the associated development which is aimed at resolving the bugs.

App testing comprises of various types. For example, functionality testing is done to ascertain if the functional requirements that are listed in the discovery phase are met. Similarly, performance testing will establish performance capabilities such as touch response, average connection time and other metrics.

The testing phase is completed when all problems and bugs are resolved and the app is approved for launch by the client/project manager.

Launch stage marks the beginning of the market phase of the app. This could require the deployment of the backend before the app can be published in the app stores for downloads. You can do a soft-launch with a selected group of people/ internal team or publish in the app stores as a beta version for early user feedback.

Submitting the App in the App Stores

To launch the app, you need to publish it in a public app store like Google Play / Apple App Store or an enterprise app store if your app is intended for enterprise use only. Listing the app requires meeting the specific guidelines of the respective app store.

Once users start downloading and using the app, issues may pop up related to the app functioning or you would want to incrementally add new features to keep your users engaged. For this, a good app maintenance services team can be very effective.

The success of a mobile app is greatly dependent on the app marketing strategy you implement. Most of the successful apps follow a robust promotional plan from the get-go.

The mobile app development process can be quite overwhelming and tedious. However, it can become an extremely rewarding process if done in the right manner. The steps discussed above are built upon our years of experience in developing mobile apps for both enterprises and startup clients. 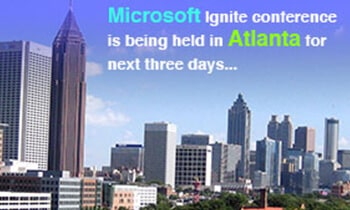 Microsoft Ignite 2016 Focuses On Security, Intelligence And The Cloud 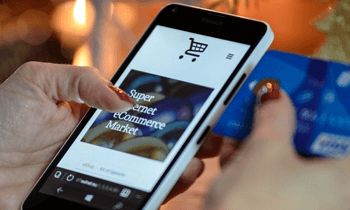